It is with deep sadness that the LSO announces the death of its esteemed President, Sir Colin Davis.
Sir Colin first conducted the LSO in 1959 and became Principal Conductor in 1995. He was the longest serving Principal Conductor in the LSO’s history and has been at the head of the LSO family for many years. His musicianship and his humanity have been cherished by musicians and audiences alike.
Sir Colin’s role in British musical life was immense. Alongside his commitment to the LSO, he forged special relationships with the Royal Opera House, the BBCSO, and the English Chamber Orchestra, as well as mentoring many young performers and conductors at the Royal Academy of Music and the Guildhall School.
He was internationally renowned for his interpretations of Mozart, Sibelius and Berlioz, and music lovers across the world have been inspired by his performances and recordings.
Sir Colin passed away after illness on Sunday evening, 14 April, at the age of 85. He will be remembered with huge affection and admiration by the LSO and our thoughts are with his family at this time. 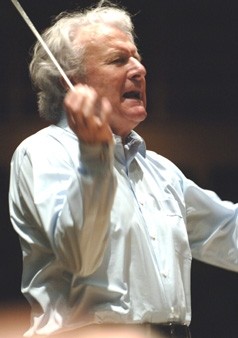 Sir Colin Davis – biography
Sir Colin Davis was President of the London Symphony Orchestra and Honorary Conductor of the Dresden Staatskapelle.
Sir Colin made his debut with the LSO in 1959 at the Royal Festival Hall. In the 1960s and 70s he conducted many of the LSO’s annual series at the Royal Festival Hall, including the Jubilee Season. In 1964 Sir Colin embarked with the LSO on its first world tour, taking in New York, West Coast USA, Japan, Korea and Hong Kong. He conducted the LSO’s Tippett / Berlioz Festival in 1982: their first major concert series in the newly opened Barbican. In 1993 Sir Colin and the LSO gave three complete performances of Les Troyens. In 1997 Sir Colin travelled with the LSO to New York to conduct their first Residency at the Lincoln Center, and the LSO’s ‘Berlioz Odyssey’ throughout 1999-2000 saw Sir Colin conduct the orchestra in all of Berlioz’s major works. In 2007-2008 he performed Berlioz and Sibelius with the LSO, and throughout 2009-2011 he conducted the LSO in a landmark series of Nielsen Symphonies, conducting these works for the first time.
Sir Colin Davis recorded widely with Philips, BMG and Eratoas well as on LSO Live. Recordings for which LSO Live and Sir Colin have received awards include two Grammy awards, a Classical Brit Award and the Gramophone Award for Best Opera 2002 for Les Troyens, and the Best Opera Grammy Award in 2006 for Verdi’s Falstaff. In 1995 Sir Colin won the Royal Philharmonic Society Gold Medal, followed by the Classic Brit Male Artist of the Year Award, and the Critics’ Award, in 2002 and the Classic Brit Male Artist of the Year Award again in 2008.
Sir Colin was made a Commander of the Order of the British Empire in 1965, and received a Knighthood in 1980. He was awarded international honours by Italy, France, Germany and Finland. Sir Colin was named a Member of the Order of the Companions of Honour in the Queen’s Birthday Honours in 2001. Sir Colin received The Queen’s Medal for Music in December 2009 and was awarded the Commander of the Order of Dannebrog by the Queen of Denmark in 2012.
During his career Sir Colin conducted the BBC Scottish Orchestra, moving to Sadler’s Wells Opera House in 1959. He spent 1967 – 71 as Chief Conductor of the BBC Symphony Orchestra, became Music Director of the Royal Opera House Covent Garden in 1971 and also Principal Guest Conductor of the Boston Symphony Orchestra in 1972 and the London Symphony Orchestra in 1975. Sir Colin spent 1983 – 1992 with the Bavarian Radio Symphony Orchestra, was Principal Guest Conductor of the New York Philharmonic from 1998 – 2003 and was Honorary Conductor of the Dresden Staatskapelle from 1990. He was Principal Conductor of the LSO from 1995 – 2006 and became the orchestra’s ninth President in 2007.
Sir Colin Davis was born in Weybridge, Surrey in 1927. 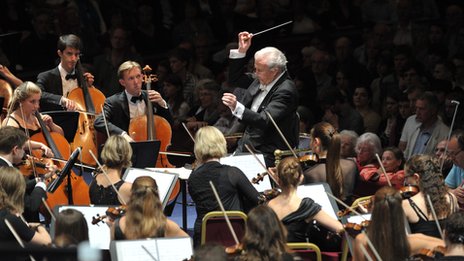 Conductor Sir Colin Davis has died at the age of 85, the London Symphony Orchestra has announced.
Surrey-born Sir Colin made his debut with the orchestra in 1959 and was its longest serving principal conductor.
He worked with the Royal Opera House, the BBC Symphony and English Chamber orchestras and was internationally renowned for his interpretations of Mozart, Sibelius and Berlioz.
Messages of condolence are flooding in to a page on the LSO’s website.
The LSO said he would be remembered with “huge affection and admiration”.
Born in Weybridge on 25 September 1927, Sir Colin studied clarinet at the Royal College of Music, going on to play in the band of the Household Cavalry during his military service.
He began his conducting career as assistant conductor with the BBC Scottish Symphony Orchestra in 1957, before moving to Sadlers Wells in 1959 as principal conductor and later as musical director.
He became chief conductor of the BBC Symphony Orchestra in 1967 and music director of the Royal Opera House in 1971. Sir Colin conducted the Bavarian Radio Symphony Orchestra between 1983 and 1992.
He was the LSO’s principal conductor between 1995 to 2006 and became its president in 2007.
He has also been principal guest conductor with the Boston Symphony Orchestra and New York Philharmonic and in 1990 became honorary conductor of the Dresden Staatskapelle.
Knighted in 1980, Sir Colin was awarded international honours by Denmark, Italy, France, Germany and Finland.
He became a Companion of Honour in the Queen’s Birthday Honours in 2001 and received The Queen’s Medal for Music in December 2009.
His live recording with the LSO of The Trojans by Berlioz won two Grammys and a Classical Brit Award in 2002 and four years later there was another Grammy for Verdi’s Falstaff. He won the Classic Brit Male Artist of the Year Award twice.
In a statement, the LSO said he died after an illness.
‘Historic contribution’
“Sir Colin’s role in British musical life was immense… music lovers across the world have been inspired by his performances and recordings,” it added.
The LSO said he mentored many young performers and conductors at the Royal Academy of Music and the Guildhall School.
Other tributes included Borjan Canev of the Macedonian Philharmonic Orchestra, who wrote: “Rest in peace Sir Colin, and thank you for being my inspiration.”
Paul Polivnick, conductor laureate at New Hampshire Music Festival, said: “I would just like to say how much I admired this great man. In 1971 I was a Bernstein Conducting Fellow at the Tangelwood Music Festival and Sir Colin came to conduct the Missa Solemnis of Beethoven with the Boston Symphony.
“He kindly gave up some of his valuable time to meet with the handful of conducting fellows and I was immediately struck by his integrity and sincerity. Thank you Colin for your life, very well lived! With deep affection and appreciation.”
Peter Niven added: “This is such sad news. As a member of the London Symphony Chorus, I was conducted many times in concerts by Sir Colin. He was a wonderful, generous musician who will be greatly missed.”
Harriet Harman, deputy Labour leader, also tweeted: “Sir Colin Davis made a historic contribution to music – in this country and worldwide. Condolences to his family.” 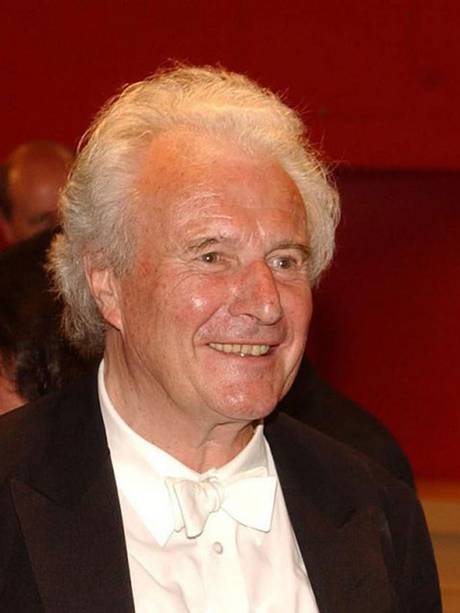 Conductor Sir Colin Davis has died at the age of 85, the London Symphony Orchestra has announced.
Sir Colin first conducted the LSO in 1959, and became the longest-serving principal conductor in the orchestra’s history, serving for more than 10 years after his appointment in 1995.
In a statement, the LSO said his “role in British musical life was immense”. It added: “His musicianship and his humanity have been cherished by musicians and audiences alike. Music lovers across the world have been inspired by his performances and recordings.”
Sir Colin had also been the chief conductor of the BBC Symphony Orchestra between 1967-71 and had links to the Royal Opera House and the English Chamber Orchestra. He became the LSO’s ninth president in 2007.
Born in Weybridge, Surrey, in 1927, Sir Colin studied initially as a clarinettist. In 1957 he became assistant conductor of the BBC Scottish Orchestra.
He was knighted in 1980 and received the Queen’s Medal for Music in 2009. He also won many international honours and was renowned for his interpretations of Mozart, Sibelius and Berlioz.
“He will be remembered with huge affection and admiration by the LSO,” the statement added.
The LSO said in its statement that Sir Colin died after a short illness. 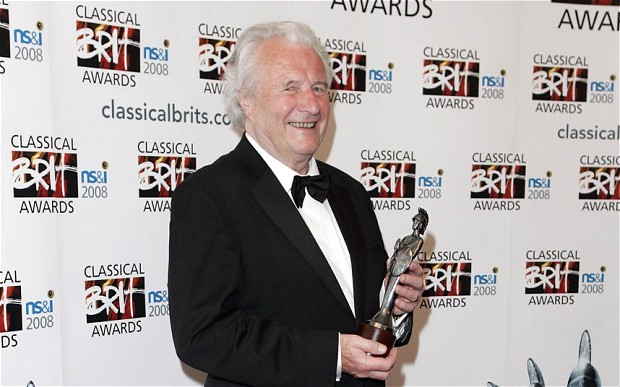 Sir Colin Davis, who has died at the age of 85, was one of the few conductors of world stature this country has produced since the war, says Ivan Hewett.
Over an extraordinarily long career, he made a seamless transition from angry young firebrand to wise elder statesman of the podium.
Seeing his mild gestures and hearing the rapturous and radiant sound he conjured from the London Symphony Orchestra in recent years, it was hard to imagine this was the same man who once made a speciality of abrasive modern music, and during his tenure as music director at Sadlers Wells Opera from 1960 to 1966 ruffled quite a few feathers with his abrasive manner.
A factor that may explain Davis’s fieriness as a young man, and perhaps his serenity as an older one, is the long struggle he had to break into conducting. He first entered musical life as a clarinetist, but when he left military service in 1949 at the age of 22 he was already determined to become a conductor.
He had a lean time of it until his first appointment at the BBC Scottish Symphony Orchestra in 1957 – and that was at the third attempt.
It wasn’t long before Davis’s special gift for Mozart became evident, and also a passion for Berlioz, a conductor that Davis had a mysterious affinity for.
During the 1960s and 1970s Davis’s championing of Berlioz did much persuade a sceptical musical world that here was a truly giant figure, a third 19th century colussus to put beside Wagner and Verdi.
After Sadlers Wells came a short spell as principal conductor of the BBC Symphony Orchestra, where his interest in new music happily co-incided with the reign of the BBC’s radical controller of music William Glock.
The eagerness to explore new repertoire could be seen in his 15-year tenure as principal conductor of Covent Garden, where he conducted among other things Berg’s Wozzeck and Lulu, and Michael Tippett’s Knot Garden and Ice Break.
After an ten-year interregnum, when he was Chief Conductor of the Bavarian Radio Symphony Orchestra and less visible in the British musical scene, Davis was appointed principal conductor of the London Symphony Orchestra in 1995.
Now he appeared in his second incarnation, silver-haired, ruminative, a man who now thought of music as a beautiful refuge rather than a bracing challenge.
He was the longest serving principal conductor in the orchestra’s history, and after he became the orchestra’s President in 2006 he continued to conduct the orchestra regularly.
He became a much sought-after teacher for young conductors, and had a long association with the Royal Academy of Music.
As for Davis’s conducting in those later years, it had a rich all-round humanity that at its best was enormously attractive, and an impetuous energy that belied his age.
Of his wonderful recordings on the LSO live label, the ones I treasure are of Verdi’s Falstaff and Berlioz’s Les Troyens.
Despite his ever-increasing devotion to Mozart, Davis never lost his curiosity for the new and neglected. One of the orchestral series I’ve most enjoyed in recent years was Davis’s complete cycle of symphonies by the Danish composer Carl Nielsen.
Davis’s performances brilliantly projected the struggles of a composer trying to make sense of modernity, in a way that suggested he’d found a kindred spirit. 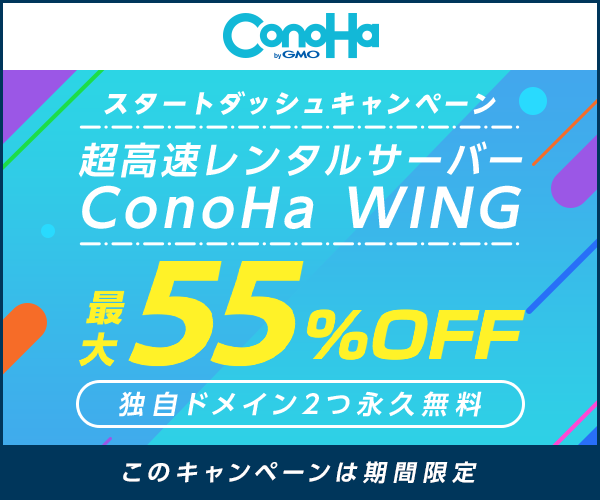