During the current SARS-CoV-2 pandemic that is devastating the modern societies worldwide, many variants that naturally acquire multiple mutations have emerged. Emerging mutations can affect viral properties such as infectivity and immune resistance. Although the sensitivity of naturally occurring SARS-CoV-2 variants to humoral immunity has recently been investigated, that to human leukocyte antigen (HLA)-restricted cellular immunity remains unaddressed. Here we demonstrate that two recently emerging mutants in the receptor binding domain of the SARS-CoV-2 spike protein, L452R (in B.1.427/429) and Y453F (in B.1.298), can escape from the HLA-24-restricted cellular immunity. These mutations reinforce the affinity to viral receptor ACE2, and notably, the L452R mutation increases protein stability, viral infectivity, and potentially promotes viral replication. Our data suggest that the HLA-restricted cellular immunity potentially affects the evolution of viral phenotypes, and the escape from cellular immunity can be a further threat of the SARS-CoV-2 pandemic. 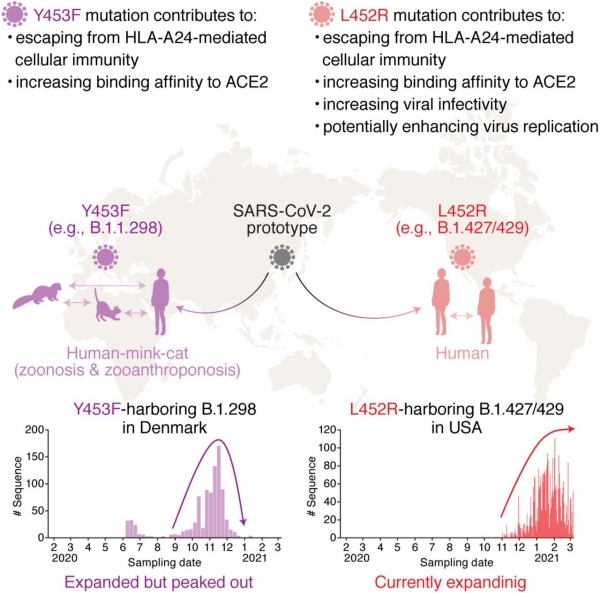 Coronavirus disease 2019 (COVID-19) is an infectious disease caused by severe acute respiratory syndrome coronavirus 2 (SARS-CoV-2). Since an unusual outbreak in Wuhan, Hubei province, China, in December 2019 (Wu et al., 2020; Zhou et al., 2020), SARS-CoV-2 has rapidly spread all over the world, and as of March 2021, SARS-CoV-2 is an ongoing pandemic: more than one hundred million cases of infections have been reported worldwide, and more than two million people died of COVID-19 (WHO, 2020a).

In this study, we investigate the possibility for the emergence of the SARS-CoV-2 mutants that can escape from the HLA-restricted cellular immunity. We demonstrate that at least two naturally occurring substitutions in the receptor binding motif (RBM; residues 438-506) of the SARS-CoV-2 S protein, L452R and Y453F, which were identified in the two major variants, B.1.427/429 (L452R) and B1.1.298 (Y453F), can be resistant to the cellular immunity in the context of HLA-A*24:02, an allele of HLA-I. More intriguingly, the L452R and Y453F mutants increase the binding affinity to ACE2, and the experiments using pseudoviruses show that the L452R substitution increases viral infectivity. Furthermore, we artificially generate the SARS-CoV-2 harboring these point mutations by reverse genetics and demonstrate that the L452R mutants enhance viral replication capacity.

We set out to address the possibility of the emergence of the naturally occurring mutants that can potentially confer the resistance to antigen recognition by HLA-restricted cellular immunity. A bioinformatic study has suggested that the 9-mer peptide in the RBM, NYNYLYRLF (we designate this peptide “NF9”), which spans 448-456 in the S protein, can be the potential epitope presented by HLA-A24 (Kiyotani et al., 2020), an HLA-I allele widely distributed all over the world and particularly predominant in East and Southeast Asian area (Table S1). Additionally, three immunological analyses using COVID-19 convalescents have shown that the NF9 peptide is an immunodominant epitope presented by HLA-A*24:02 (Gao et al., 2021; Hu et al., 2020; Kared et al., 2021). To verify these observations, we obtained the peripheral blood mononuclear cells (PBMCs) from nine COVID-19 convalescents with HLA-A*24:02 and stimulated these cells with the NF9 peptide. As shown in Figure 1A, a fraction of CD8+ T cells upregulated two activation markers, CD25 and CD137, in response to the stimulation with NF9. In the nine samples of COVID-19 convalescents with HLA-A*24:02, the percentage of the CD25+CD137+ cells in the presence of the NF9 peptide (5.3% in median) was significantly higher than that in the absence of the NF9 peptide (0.49% in median) (Figure 1B; P=0.016 by Wilcoxon signed-rank test). Additionally, the stimulation with the NF9 peptide did not upregulate CD25 and CD137 in the CD8+ T cells of three seronegative samples with HLA-A*24:02 and the percentage of the CD25+CD137+ cells in seronegative samples (0.93% in median) was significantly lower than that in COVID-19 convalescent samples (Figure 1B; P=0.011 by Mann-Whitney U test). Consistent with previous reports (Gao et al., 2021; Hu et al., 2020; Kared et al., 2021; Kiyotani et al., 2020), our data suggest that the NF9 peptide is an immunodominant HLA-A*24:02-restricted epitope recognized by the CD8+ T cells of COVID-19 convalescents in our cohort. 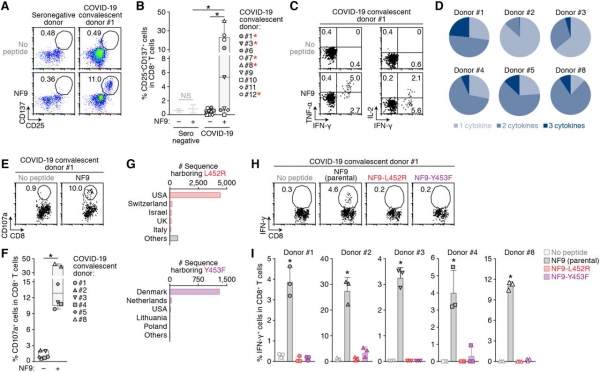 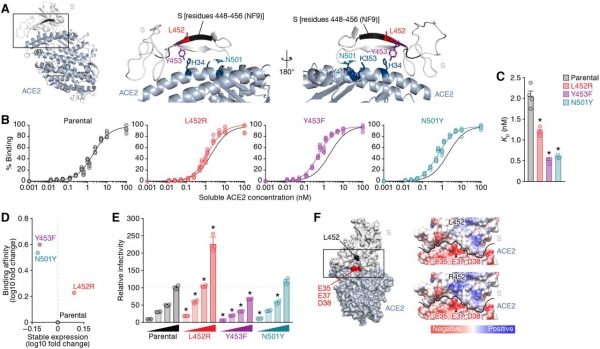 〔Figure 2. Increase of the binding affinity to ACE2 and viral infectivity by the L452 mutation.
(A) Location of the NF9 peptide (residues 448-456) in the cocrystal structure of the SARS-CoV-2 S and human ACE2 proteins (PDB: 6M17) (Yan et al., 2020). An overview (left), the enlarged view of the boxed area in the left panel (middle) and the view of the middle panel rotated 180° on the y-axis (right) are shown. The residues 448-456 of SARS-CoV-2 S (corresponding to the NF9 peptide) are shown in black. (B-D) Binding affinity of SARS-CoV-2 S RBD to ACE2 by yeast surface display. The percentage of the binding of the SARS-CoV-2 S RBD expressing on yeast to soluble ACE2 (B) and the KD values (C) are shown. (D) The level of stable expression of the SARS-CoV-2 RBD on yeast (x-axis) and the binding affinity to ACE2 (y-axis) compared to parental RBD. In B, the fitting curve of parental RBD is shown in all panels as black lines.
(E) Pseudovirus assay. The HIV-based reporter virus pseudotyped with the parental SARS-CoV-2 S or its derivatives (L452R, Y453F and N501Y) were inoculated into the 293 cells transiently expressing human ACE2 and TMPRSS2 at 4 different doses (1, 3, 5 and 10 ng p24 antigens). The percentages of the infectivity compared to the virus pseudotyped with parental S (10 ng p24 antigen) are shown.
(F) Gain of electrostatics complementarity by the L452R substitution. (Left) The surface structure of the SARS-CoV-2 S and ACE2 (PDB: 6M17) (Yan et al., 2020). The residue 452 of the SARS-CoV-2 S and the negatively charged patch on ACE2 (residues E35, E37 and D38) are indicated by black and red. The boxed area is enlarged in the upper right panel. (Right) Coulombic surface coloring at the structures of the SARS-CoV-2 S and ACE2 (PDB: 6M17) (Yan et al., 2020) (top) and a model of the L452R substitution (bottom). The black line indicates the border between SARS-CoV-2 S and ACE2.
In B and E, these assays were performed in quadruplicate.
In C, statistically significant differences (*, P<0.05) versus parental S are determined by Mann-Whitney U test. In E, statistically significant differences (*, P<0.05) versus parental S at the same dose are determined by ANOVA with multiple comparisons by Bonferroni correction.〕 Increase of pseudovirus infectivity by the L452R mutation

To directly analyze the effect of the mutations of interest on viral infectivity, we prepared the HIV-1-based reporter virus pseudotyped with the SARS-CoV-2 S protein and its mutants and the 293 cells transiently expressing human ACE2 and TMPRSS2. As shown in Figure 2E, although the N501Y mutation faintly affected viral infectivity in this assay, the L452R mutations significantly increased viral infectivity compared to parental S protein. In contrast to the yeast display assay (Figures 2B and 2C), the infectivity of the Y453F mutant was significantly lower than that of parental S protein (Figure 2E). Altogether, these findings suggest that the L452R substitution increases the binding affinity of the SARS-CoV-2 RBD to human ACE2, protein stability, and viral infectivity. Although the L452 residue is not directly located at the binding interface (Figure 2A), structural analysis and in silico mutagenesis suggested that the L452R substitution can cause a gain of electrostatics complementarity (Selzer et al., 2000) (Figure 2F). Because the residue 452 is located close proximity to the negatively charged patch of ACE2 residues (E35, E37, D38), the increase of viral infectivity by the L452R substitution can be attributed to the increase in the electrostatic interaction with ACE2.

To investigate the effect of the mutations in the RBM on viral replication, we artificially generated the recombinant SARS-CoV-2 viruses that harbor the mutations of interest as well as parental recombinant virus by a reverse genetics system (Torii et al., 2021). The nucleotide similarity of SARS-CoV-2 strain WK-521 (GISAID ID: EPI_ISL_408667) (Matsuyama et al., 2020), the backbone of the artificially generated recombinant SARS-CoV-2, to strain Wuhan-Hu-1 (GenBank: NC_045512.2) (Wu et al., 2020) is 99.91% (27 nucleotides difference) and the sequences encoding the S protein between these two strains are identical, indicating that the strain WK-521 is a SARS-CoV-2 prototype. We verified the insertions of the targeted mutations in the generated viruses by direct sequencing (Figure 3A) and performed virus replication assay using these recombinant viruses. As shown in Figure 3B, we revealed that the growth of the L452R mutant in VeroE6/TMPRSS2 cells was significantly higher than that of parental virus. Together with the findings in the binding assay (Figures 2B-2D) and the assay using pseudoviruses (Figure 2E), our results suggest that the L452R mutation potentially increase viral replication. 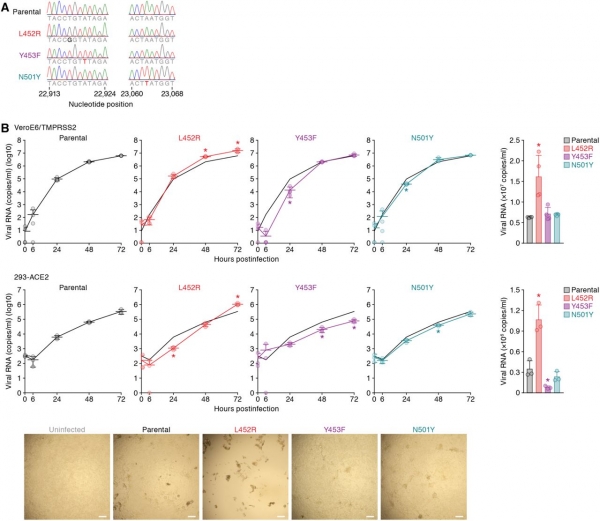 〔Figure 3. Enhancement of viral replication by the L452 mutation.
(A) Chromatograms of the mutated regions of the SARS-CoV-2 viruses artificially generated by reverse genetics. The chromatograms of the nucleotide positions 22,913-22,924 (left) and 23,060-23,068 (right) of parental SARS-CoV-2, the L452R, Y453F and N501Y mutants are shown.
(B) Growth kinetics of parental SARS-CoV-2 and the SARS-CoV-2 mutants. Parental SARS-CoV-2, the L452R, Y453F and N501Y mutants (100 pfu) were inoculated into VeroE6/TMPRSS2 cells (top) and 293-ACE2 cells (middle) and the copy number of viral RNA in the culture supernatant was quantified by real-time RT-PCR. (Left) The growth curve of the viruses inoculated. The result of parental virus is shown in all panels as a black line. (Right) The amount of viral RNA in the culture supernatant at 72 h postinfection. The assays were performed in quadruplicate (VeroE6/TMPRSS2 cells) or triplicate (293-ACE2 cells), and statistically significant differences (*, P<0.05) versus parental S are determined by Student’s t test. (Bottom) Representative figures of the blight fields of 293-ACE2 cells infected with the viruses indicated at 72 h post infection are also shown. Bars, 200 μm.〕 Dynamics of the spread of the RBM mutants during the current pandemic 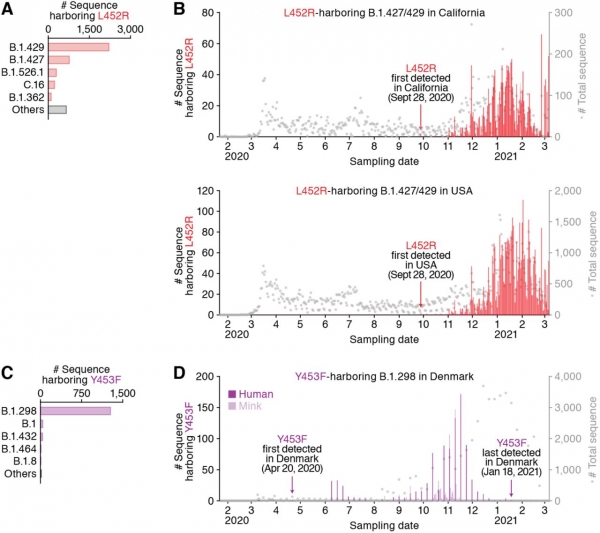 〔Figure 4. Epidemic dynamics of the B.1.298 and B.1.427/429 lineages during the current pandemic.
The PANGO lineages harboring the L452R (A and B) and Y453F (C and D) and their epidemic dynamics are summarized.
(A and C) Distribution of the L452R and Y453F mutants during the current pandemic. The top 5 PANGO lineages (https://cov-lineages.org/index.html) that harbor the L452R (A) and Y453F (C) mutations are shown. The raw data are summarized in Table S3.
(B and D) Epidemic dynamics of the L452R-harboring B.1.427/429 lineage in California state, the USA (B, top) and the USA (B, bottom) and the Y453F-harboring B.1.298 lineage in Denmark (D). The numbers of the sequences harboring mutation per day (left y-axis, bars) and the numbers of total sequences per day (right y-axis, dots), from January 22, 2020 to March 6, 2021, are summarized. Note that a L452R variant isolated from gorilla and three Y453F variants isolated from cats are not included.
See also Figure S2 and Tables S3 and S4.〕

The phylogenetic analysis of the whole genome sequences of the B.1.1.298 lineage SARS-CoV-2 suggested multiple SARS-CoV-2 transmissions between humans to minks (Figure S2). Additionally, the three sequences that contain the Y453F mutation were isolated from cats in Denmark: the two sequences out of them (GISAID ID: EPI_ISL_683164 and EPI_ISL_683166) made a single clade, while the other one (GISAID ID: EPI_ISL_683165) had a distinct origin (Figure S2). These results suggest that this SARS-CoV-2 variant has transmitted from humans to cats multiple times and some of them may spread among Danish cat population. However, the epidemic of a fraction of the B.1.1.298 lineage containing the Y453F mutation in Denmark peaked during October to November, 2020, and subsequently, gradually reduced (Figure 4D). The variant containing the Y453F mutation was last collected in Denmark on January 18, 2021 (GISAID ID: EPI_ISL_925998) and it has not been reported worldwide since then (Figure 4D). 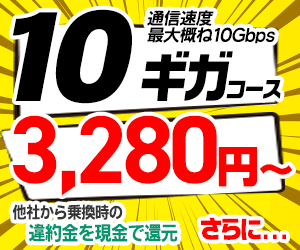